The City of Hallandale Beach is proud to be home to Heritage and Historic sites. 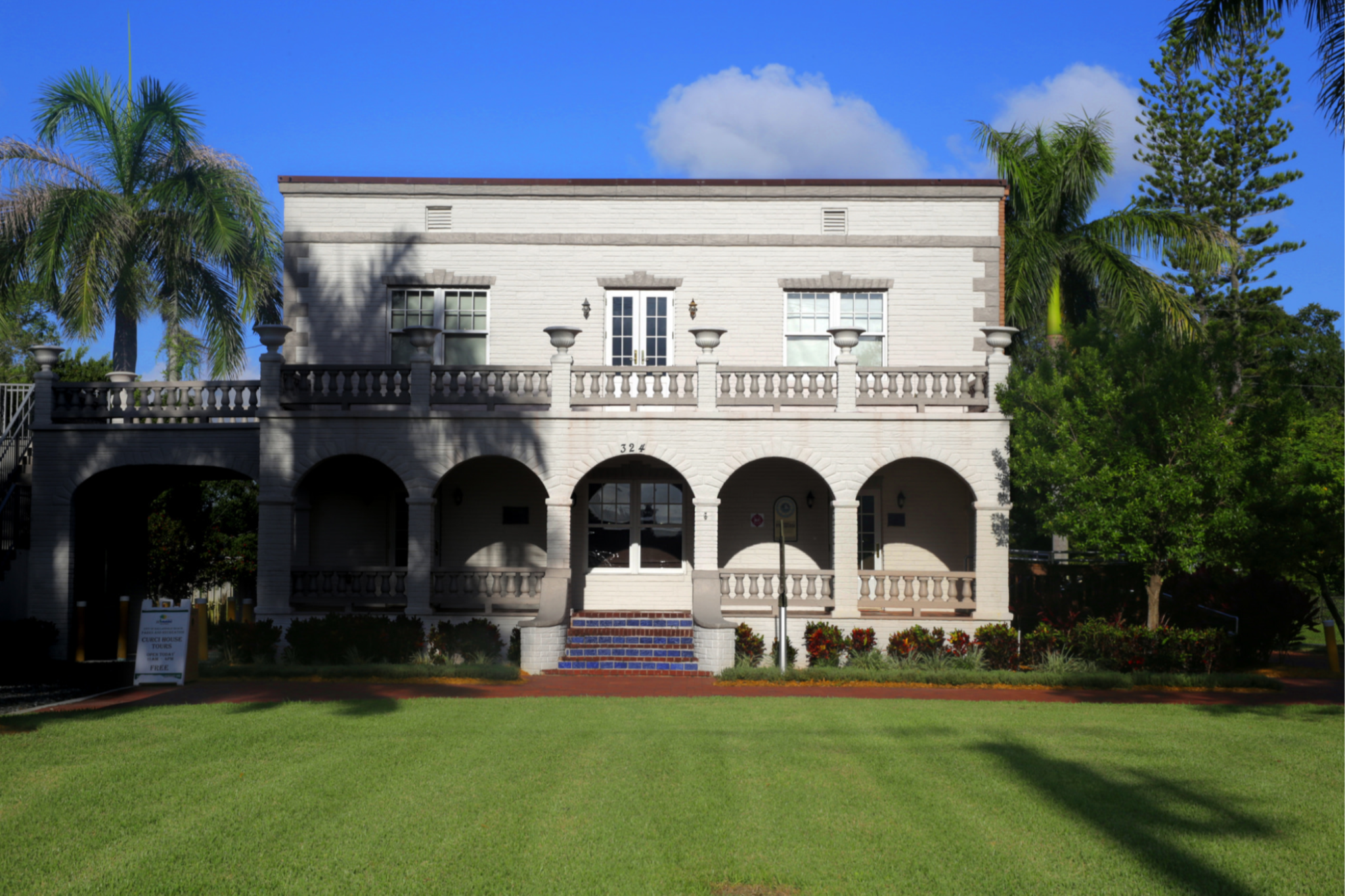 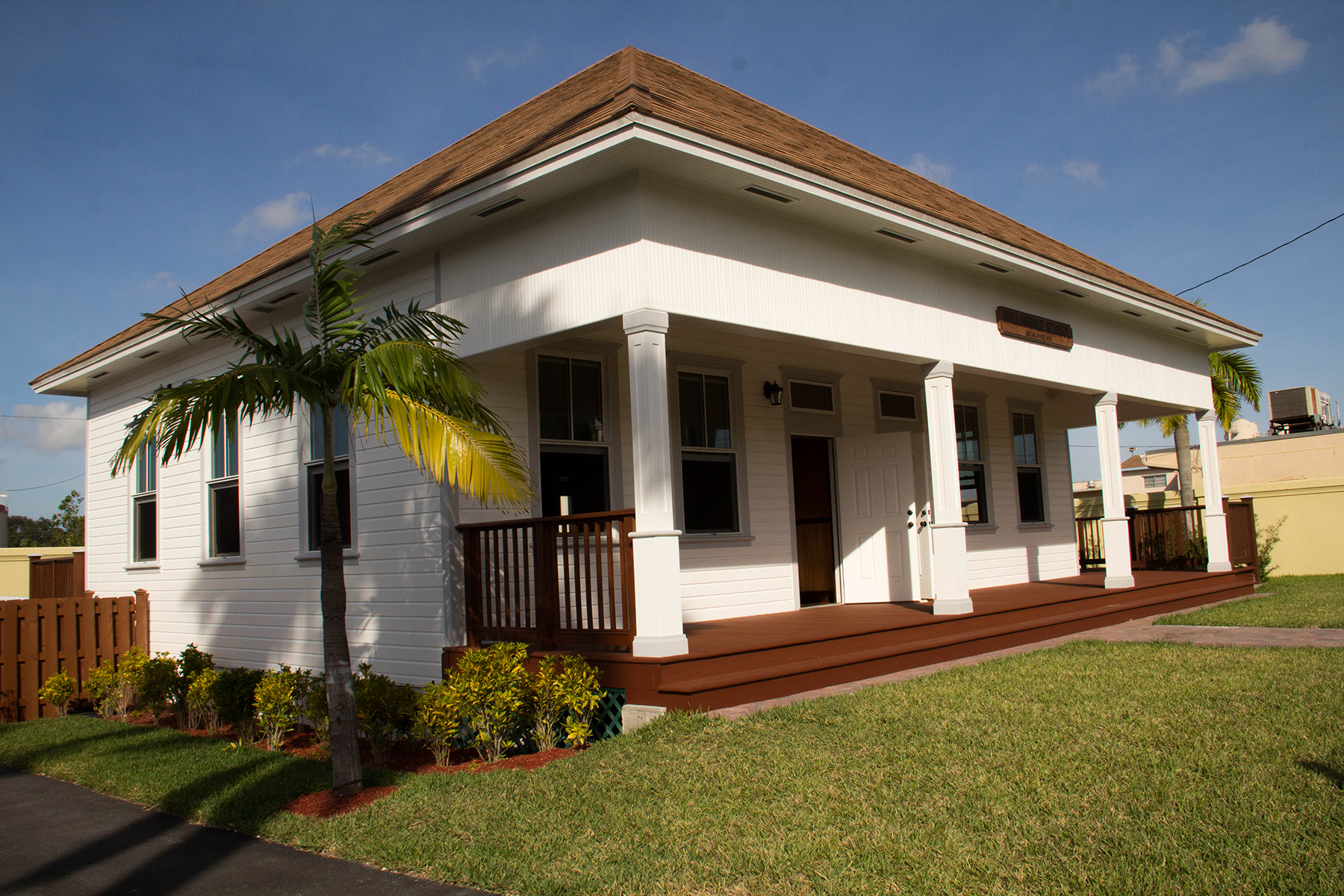 
In 1907, Frank Anthony Curci, with his wife Rosina and three small children, settled in Hallandale Beach at SW 5th Avenue and West Dixie Highway. As a pioneer family, they struggled, yet grew prosperous by reinvesting their farming profits into land purchases, which they used for additional tomato fields and fruit groves. As the family grew to a total of eleven children, so did Curci’s vision as he expanded into the construction business. Mr. Curci spoke five
languages and was also an accomplished violinist, displaying his talents with the John Philip Sousa Orchestra during the 1896 grand opening of the Henry Flagler Royal Palm Hotel in Miami.
In 1924, the family built their dream home, “Villa Providence,” on their 11-acre site. This Mediterranean-style villa was constructed of concrete filled terra-cotta block walls, with Dade pine floors and imported Cuban tile details throughout. The most extraordinary feature was the array of imported Italian color glass that was
embedded in the exterior stucco finish. The Italian glass sparkled in the sunlight and glowed in the moonlight.
In 1926, when the Great Hurricane hit, dozens of nearby residents sought shelter with the family as their homes were damaged ordestroyed. The Curci home stood strong, sustaining only minor damage. Frank, Rosina and family lived in the home until the early 1950s.

On December 24, 2013, Villa Providence was listed on the National Register of Historic Places.

Be a part of Hallandale Beach Legacy. Purchase your own part of history and buy an engraved memorial brick to be placed in the yard of the Curci House.


The Historic Hallandale Schoolhouse was built in 1910, and is the oldest building in Broward County known to have been originally built as a schoolhouse. When the 1910 hurricane destroyed the school, local citizens petitioned the Dade County School Board (Broward was formed in 1915) for a new building. The School Board claimed that it lacked the funds to replace the school but offered to contribute the lumber and other materials necessary to build another school house. A group of Hallandale residents traveled to Miami, picked up the wood and supplies, and delivered it to the site of the first school. The two-room structure was built with by volunteer labor.
The last public school classes were held in the spring of 1916. The school sat abandoned for the next five years and in 1921 Bethlehem Lutheran Church purchased the building. The building served as a church learning center until 1966 when it was donated to the City and moved to its present location.
As time took its toll on the wooden structure, the City stepped in to preserve the historical landmark in the City’s evolution. The City’s Department of Public Works craftsmen worked diligently to bring the building back to life.
The Historic Hallandale Schoolhouse grand opening was held February 18, 2015. A Hallandale Beach Historical Site Sponsored by the Historical Preservation Trust and City Commission. 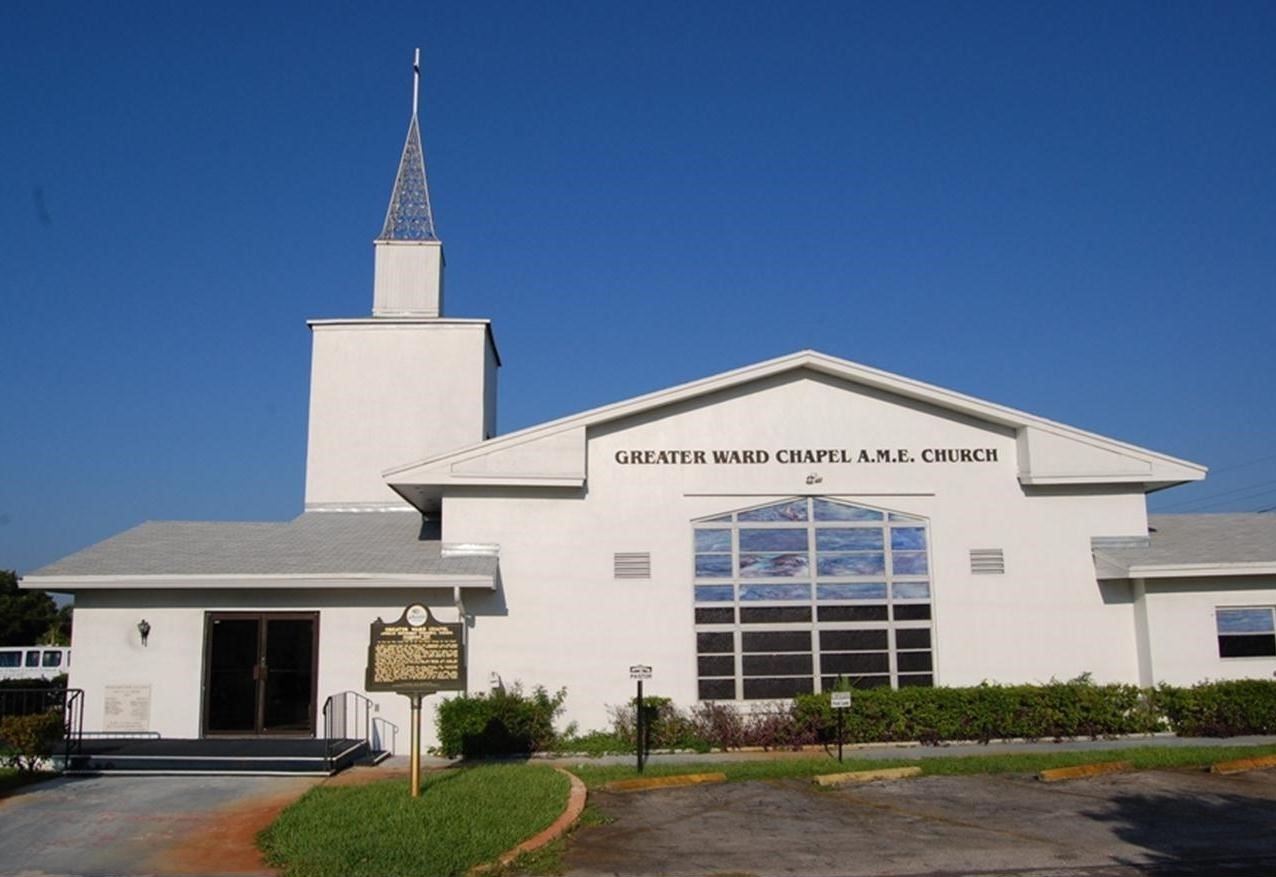 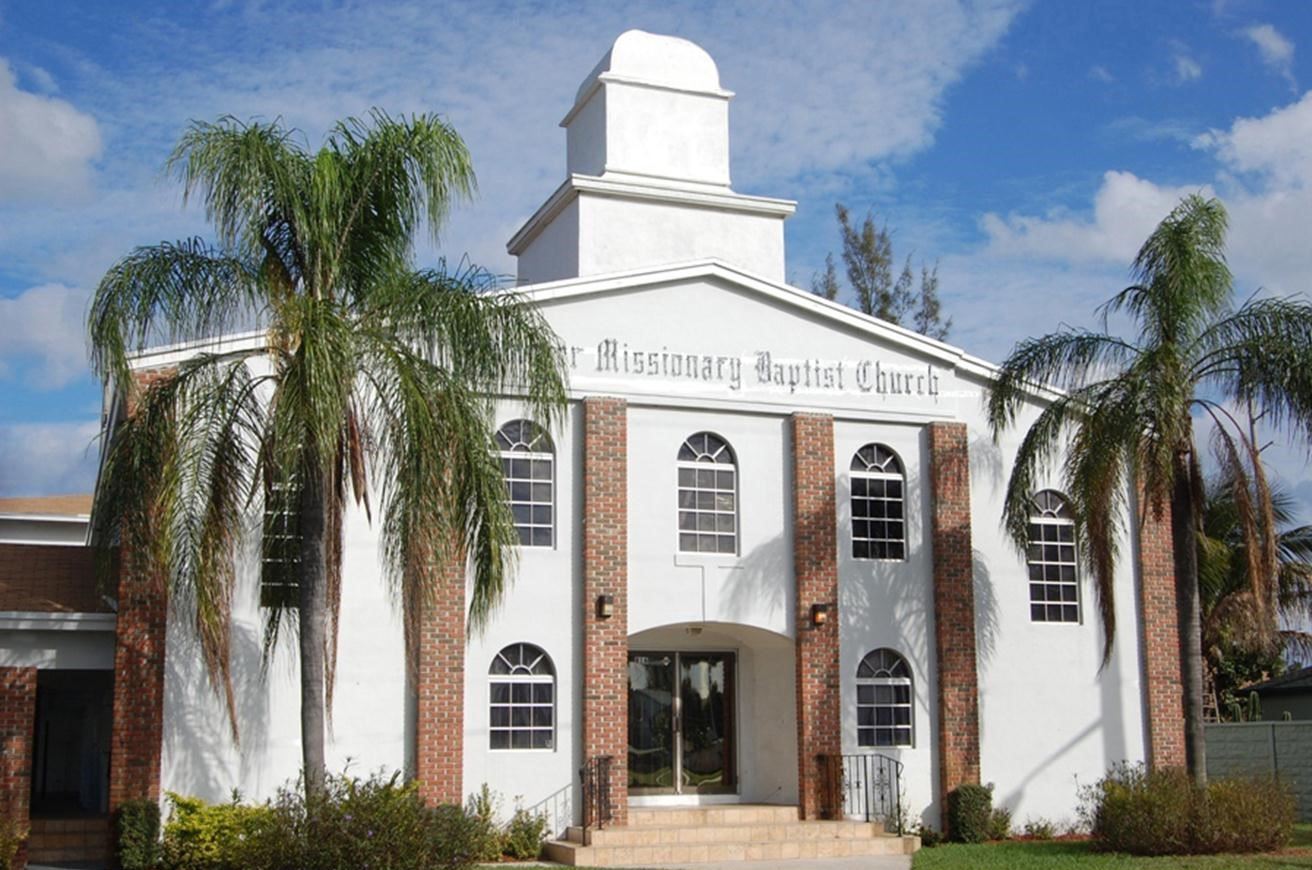 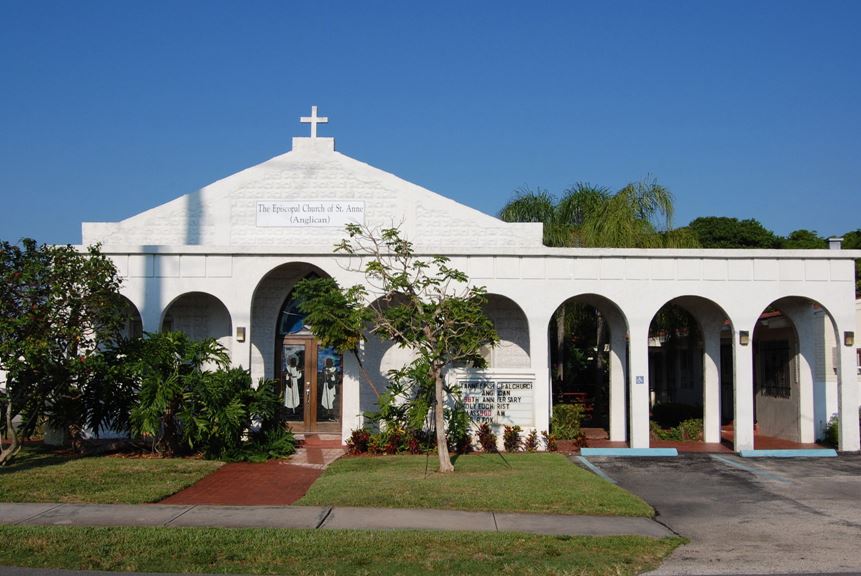 In 1902 a mustard seed was planted in the community, and with God's blessing a group known as the "Pioneers" established the first church, which blossomed the dream into a reality.

The church was named after the late Bishop Thomas D. Ward and was originally located at the corner of 1st Avenue and 3rd Street, under the leadership of Reverend W.H. Maddox. As a small farming community with a scattered population, the membership grew slowly at first, and services were held only twice a month.

By 1958, the church had grown by leaps and bounds, and under the dynamic leadership of the late Reverend David A. Russell, Sr. a sanctuary was built at this location.

Over many decades the Church has been blessed with exceptional leadership and has produced many outstanding leaders and visionaries who helped to shape and solidify the community.

On March 17, 2002 Greater Ward Chapel celebrated its 100th anniversary under the leadership of Reverend Arthur J. Davis. Reverend John Wesley Williams Jr. currently serves as the pastor of Greater Ward Chapel, which stands as the bulwark of the community where God is glorified.

The Greater Ebenezer Missionary Baptist Church was established in 1909 by Sister Lougenia Johnson and Sister Missouri Wilson conducting Sunday School under a rubber tree. In 1910 Rev. A.T. Taylor, his wife, and Sister Lula Mack joined the group and begun the official organization of the church.

Since its first structure in 1912, Ebenezer Missionary Baptist evolved with the growth of its members and leadership. The current church structure was built in 1964 under the Pastoral leadership of Rev. O.W. Foster who served from 1944-1977.

The mantle of leadership of this great ministry was passed on to Rev. Joe Cephas Johnson in 1977, and he continued to serve during this bi-centennial year.

The Greater Ebenezer Missionary Baptist Church has ministered and served the Hallandale Beach and South Broward community for 100 years. It has been a beacon of hope for the lost, a place of refuge for the needy through sharing, caring, and giving. Most of all, The Greater Ebenezer Missionary Baptist Church is a place where the gifts of the Spirit are in operation for the edification of the body of Christ, and where God is glorified.

St. Anne's Episcopal Church was established in 1914 by Melbourne Knowles, Ansel Saunders and A.L. Wilkins, all hailing from the Islands of the Bahamas. The first church services were held in a wooden building located on the corner of what in now Dixie Highway and Foster Road. The site was utilized as a Social Pool Hall from Monday to Saturday, and converted to a church sanctuary on Sundays.

In 1921, the organization purchased the current site of the church which was later destroyed by the "Great Miami Hurricane of 1926." The church sanctuary was rebuilt in 1927, but was destroyed yet again by the "Labor Day Hurricane of 1935." It is noteworthy to mention, that amidst the rubble of the 1935 Hurricane, the Church Bell was salvaged and was loaned to the City of Hallandale Beach for use as an Air-Raid warning signal during World War II.

"We can do all things in Christ who strengthens us" Philippians 4:13